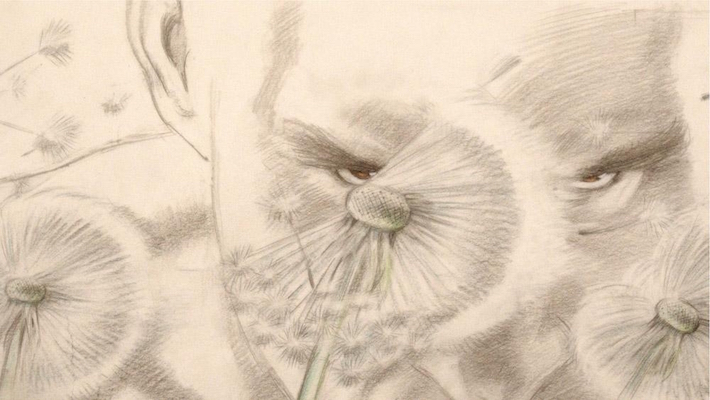 This powerful story tells the story of an old bear that lives a lonely life between home where he works late into the night on his mechanical diorama and the street corner where he peddles views. The diorama tells his life story and it’s a tough one. Taken from his wife and son to work in the circus as a slave, he escapes in a hair-raising bicycle chase and begins his search for his family. It’s intense and deeply moving.

Intricate pen and ink drawings bring to life a horrific battle during Spartan-Athenian wars 2,400 years ago.  The beauty of the drawings is crushed by moments of extreme brutality and bloodletting, barbaric battle practices unlike anything I’ve seen in a film. Williams captures the horror and determination in the faces of the warriors whose ages range from elderly to adolescent. Sadly, someone witnesses the battle and will be scarred for life.

This lively short from Pixar is based on the experiences of filmmaker Sanjay Patel as a young boy. His struggle to be an all-American kid as a first generation Indian American obsessed with Western pop culture clashes with his father’s traditional religious practices. His imagination takes him to a magical place where he discovers that maybe they have something in common after all.

In what appears to be the Soviet astronaut training programme of the Cold War, two lifelong friends are on the verge of realizing a lifelong shared dream. They have been accepted into the space programme and can barely contain their joy, leaping into the air with superhuman power. And then one disappears.  It’ll tug at your heart.

World of Tomorrow (dir. Don Hertzfeldt \ USA 2015 \ 17 min.)  Dystopian future! A girl visits the future and finds it’s a cold digital world of superficial connection and emptiness. Business as usual in this new future is carrying your own clone as an embryo endlessly to gain perpetual life. The thing is, what kind of life will you have to live endlessly if it is based solely on technology? This is one of the scariest films I’ve seen in a while, its subversive and a heck of a cautionary tale, defined by horror, fear and emptiness.

In addition, TIFF will screen the following films.

If I Was God (dir. Cordell Barker \ Can. 2015 \ 9 min.)  delightful and uplifting film about a boy in school, the girl he likes and the red headed brat he doesn’t, as he imagines what it would be like if he were God.  He raises biology class’ dissected frogs from the dead, and moves through his fantasy over the course of a day.  The layering and detail of the story and visuals is astounding, it’s clever, hilarious and joyful.

The Short Story of a Fox and a Mouse (dir. Hugo Jean/Juliette Jourdan/Kévin Roger/Marie Pillier/Camille Chaix \ France 2015 \ 7 min.) This plein air gem is stunning to look at and the story is simple yet strong. A fox chases a mouse over a vast winterscape, its cold but the fox’ bright coat, the bright colours of nature and the mouse’ vulnerability bring the tale to life. The mouse falls through the ice, and something strange happens.  This is a gorgeous dreamscape of beauty and goodwill.

The Loneliest Spotlight (dir. Bill Plympton \ USA 2015 \ 6 min.) This the delightful story of a flashing stoplight installed on the intersection of two remote desert roads. Nothing much happens except a future movie star hikes to Hollywood from the corner and a wanted man is arrested there. But in 2005 a superhighway is built nearby rendering the stoplight useless. But then there’s an accident on the highway! This dynamic and witty film speaks volumes in a few minutes.

Catch It (dir. Paul Bar/Marion Demaret/Nadège Forner/Pierre-Baptiste Marty/Julien Robyn/Jordan Soler \ France 2015 \ 5 min.) There’s something about meerkats that is deeply cinematic, they run in liquid groups, stretch to the skies, have limitless curiosity and giant eyes. So here they are, eyeing a luscious piece of fruit hanging form their territory’s biggest tree. They’ve been watching it ripen and the time is rapidly approaching. In a group they stretch up and star lovingly at it mouths watering, when a buzzard screams by and grabs it! The horror!  It’s up to them to come up with clever ways to retrieve it and set that buzzard in his place. a merry chase ensues.  Brilliant.