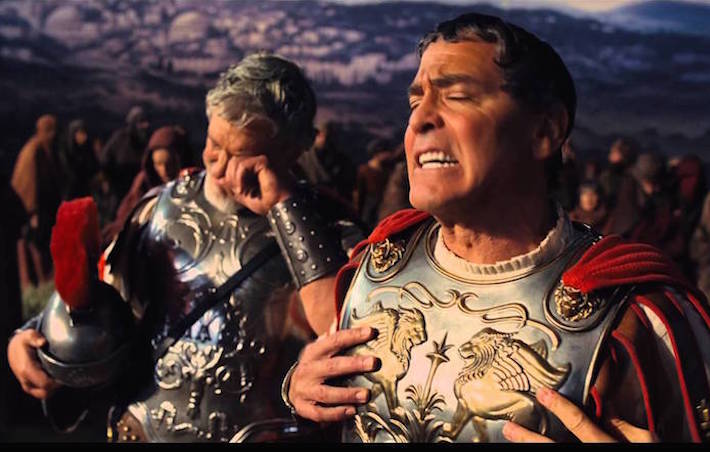 There’s a lot to love in this lighthearted and sly look at Hollywood’s alleged “golden age” although given the political and industry climate of the time, it’s hard to think of it as gold. The Coen brothers’ beautifully balanced love letter and expose, Hail Caesar is as daffy as it is rueful.

Its 1951 and the studios were still in charge of their stars’ public image, therefore their behaviour, appearance and “morals”. Studio people reigned in stars they deemed unsuitable through threats and occasionally physical abuse.

The vile Hollywood Black List was in full effect.  In 1950 a pamphlet called Red Channels had named 151 industry workers it identified as “Red Fascists and their sympathizers.”

Entertainment was vastly different back then, rope twirling singing cowboys made the studios rich, as did water ballerinas and Biblical epics. All squeaky-clean stuff. The noir era had lost its box-office dominance; the economy was booming and audiences demanded lighter, brighter fare.

The studios were spending massive amounts of money on films, but not equitably. Scenarists were notoriously underpaid for their screenplays that often netted huge income for the studios.

So they rebelled in secret, holding meetings to discuss Karl Marx’ ideology of Das Kapital the Communist text that called for equity throughout the state (Hollywood).  (Ed. note – It didn’t turn out so well for the writers.)

Capital Studio’s biggest star is Baird Whitlock, played with gusto by George Clooney, glorying in his clearly made up but manly name. Clooney’s having a blast in the film; his body language is comic, his laughs big and the guy’s not afraid to get slapped around.

Onset of his Biblical epic, Whitlock is drugged and kidnapped by a group of Commie scenarists, intellectuals bent on raising money to send to Moscow to further the cause. They’re ticked because their films make fortunes and they don’t.

Studio boss and fixer Josh Brolin steps in to launch the search for Whitlock, even as he shuts down one errant actress’ “French postcard” shoot and deflects the nosy and destructive gossip twins Thora Thacker and Thessaly Thacker (Tilda Swinton).

Meanwhile the other biggest star on the lot is a singing cowboy (Alden Ehrenreich) meant to appear in a parlour drama where he must speak in a refined fashion. He and director Laurence Laurentz (Ralph Fiennes) share a fabulously funny scene in which the director tries to shape the drawling cowboy to speak “trippingly”.  The cowboy actually fuses a drawl and upper crust accent to hilarious effect.

Hats off to Ehrenreich, who ropes, rides, trick rides, flies acrobatically though the air and never misses a beat. He’s amazing.  Let’s see more of him, fast!

Channing Tatum shows off his many talents in a lively homoerotic tap dance scene shot in a in a sailors’ bar. He sings credibly and dances like Gene Kelly, heightened, for his big movie.

Scarlett Johanson is an unmarried swimming pool beauty /major star who may be pregnant.  The studio wants to hush it up and arrange for her to adopt her own child. Johansson’s mermaid is rough and ready – she’s having a great time too.

Joel Cohen’s wife Frances McDormand is a scarf wearing, chain smoking film editor who gets one scene but nails it. Across the board the performances are spirited, dizzy and charming. There’s lots of fun to be had here, much whimsy and fun grounded by the serious issues of the time. Ultimately Hail Caesar is a bouncy satire with a heart of gold to brighten February’s pall.

Look out, this is seriously fun.

« The 2016 Academy Award® nominees for Best Animated Short Film TIFF Presents on now at TIFF Bell Lightbox, Toronto
Millennials Have the Inside Scoop on Social Media »