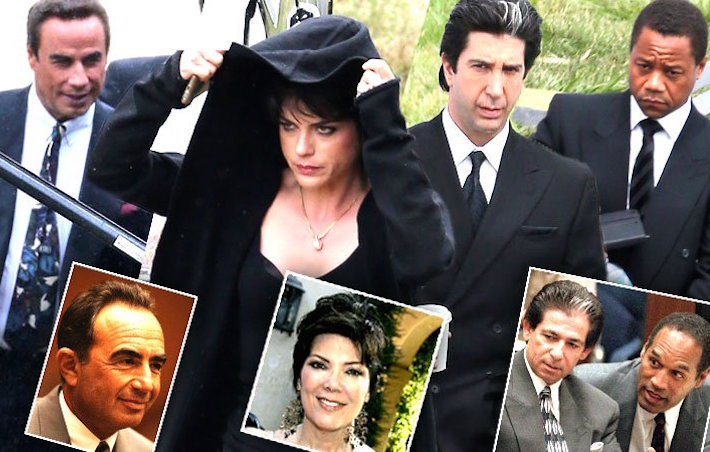 Based on Jeffrey Toobin’s book The Run of His Life: The People v. O.J. Simpson.

Many of us remember where we were the evening of June 17, 1994.  The infamous white Bronco slow chase was playing out live on television.  Many dropped everything ad stayed with CNN to watch Al Cowlings drive his friend, sports-hero-turned- murder suspect O.J. Simpson to Simpsons mother’s house.

Police expected him to say goodbye to her then turn himself in for the murder of his wife Nicole Brown Simpson. As the chase carried on, concern grew that Simpson would shoot himself. A phalanx of police vehicles followed at a respectful but insistent distance behind, maintaining Cowlings’ slow pace.

Simpson unwittingly revolutionised local TV news coverage in Los Angeles. The chase spiked so high and sustained itself for the length of it, that from then on, live aerial shots of police chases became standard. The Bronco chase was one of the oddest occurrences on live TV; 20 helicopters and 20 police cars eventually took part.  Indeed, forget football, this was the run of his life.

It’s part of a new ten parter The People v. O.J. Simpson: American Crime Story from FX.  It’s strange stepping back into the overheated world of the O.J. Simpson murder trial so many years later, the “Trial of the Century” well the latest one, that’s so familiar and so ugly.

We know what happened. The beloved all-star football player and orange juice shill was charged with brutally murdering his wife and a friend.  Photos from the scene were horrific.

There was a long and eventful trial, intense media scrutiny and a deeply polarised public was waiting for the decision.  Simpson was a hero to some and pariah to others, usually down racial lines. The city of Los Angeles was on edge.

It was just as baad behind the scenes.

It opens late one night in Brentwood, California as a white Akita stands in place on a residential street and whines. The dog looks from the street and into his property where respondents would find the murdered bodies of Nicole Brown Simpson and Ron Goldman. The dog’s keening woke neighbours blocks away.

And that’s how it begins. The Simpsons’ marriage was rocky, Nicole complained of his domineering manner to friends.  Brown had warned some that she was in danger, that Simpson was abusive, volatile and extraordinarily jealous. Perhaps he mistook Goldman for her lover.

The day of her murder she’s told friend Kris Jenner (mother of the Kardashians) that if anything happened to her, it was O.J.’s doing.  Jenner’s ex, Robert Kardashian was blindly loyal to O.J. whom he believed was innocent.

The world was riveted from the get go, from the sordid details of living rich, famous and gorgeous in LA, from the white Bronco chase past Simpson admirers waving signs that read “Go, Juice, Go” to prosecution lawyer Marcia Clark’s divorce and custody issues become public property to the colourful and bizarre courtroom antics of the defense Dream Team.

Defence lawyer Johnnie Cochrane staged a scene a scenarist couldn’t have improved. He insisted that if a glove found at the crime scene didn’t fit Simpson, it must have been planted therefore his client must be acquitted. Indeed Simpson modelled the too tight glove with a triumphant smirk. That scene launched a million jokes.

The world media reported on the trial and its incredible twists and turns and paid close attention to mounting tensions outside the courthouse.  Society columnist Dominick Dunne covered the trial from inside, sitting with the Goldman family every day. His daughter Dominque had been murdered in L.A. a couple of years earlier by her boyfriend, an aspiring actor.

We know what happened, but there’s more. Take the Dream Team, which was really a nightmare, as heavy hitters Johnny Cochrane and Robert Shapiro duked it out for supremacy while the prosecutions’ Clark and Christopher Darden bonded to fend off the hate directed to them.

Judge Lance Ito loved celebrities.  He took an official into his chambers to see his latest signed autographed photo.

Academy award winner Cuba Gooding Jr. is spectacular as Simpson, bringing to vivid life an outsize ego, boisterous and cruel. He gives us a man with a canny knowledge and ability to manipulate others, and who whether he was guilty or not, believed he was Teflon, that nothing would stick.

The People v. O.J. Simpson is a guilty pleasure, schadenfreude, there but for the grace of God etc… Call it whatever you want but re watching the O.J. show armed with new information via great performances is as fun as it gets on TV – rich nostalgia covered in dense chocolate topped with 10 parts whipped cream.

And of course, sorrow for the Brown family.