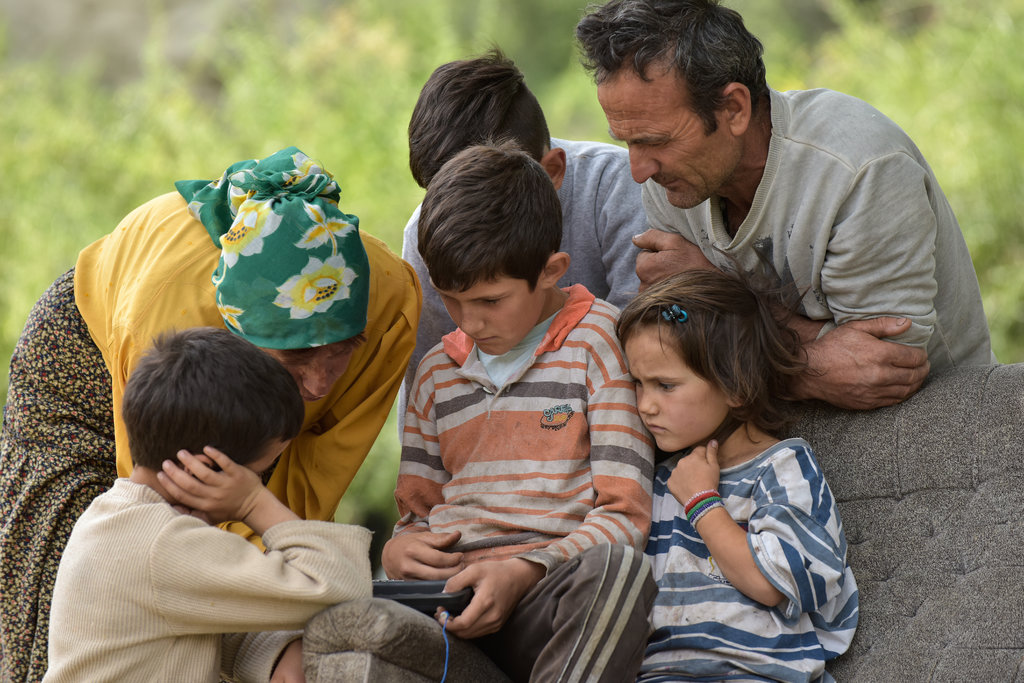 Muratova (left) with Hussein Sam and his children

Honeyland, an award-winning documentary by Tamara Kotevska and Ljubomir Stefanov offers a look inside a world few of us will ever see. An impoverished indigenous Turkish woman lives in a hut in the Macedonian mountains with her severely disabled mother. They have no electricity, water or roads but she can’t move away.  But Haditze Muratova is resilient and positive and makes the most of her primitive life.  She’s known as the last female bee-hunter in Europe, searching for hives in rocks and trees in an unforgiving natural landscape. She sells the honey in nearby Skopje, an easy task given the quality of her product and her lively natural salesmanship. This incredible story – which has won eleven awards including three at Sundance – would never have been told had it not been for the filmmakers who came upon her by lucky accident.

How did you find this marvellous woman?

It was a miracle, actually. We were trying to make another documentary about the weird phenomenon of a river which naturally changes its flow direction every ten years. It’s a phenomenon.  Villages nearby are abandoned. As we started the research, we found beehives in the rocks that were man-made and asked around to find out who made them.

She and her mother live in shocking poverty and deprivation. Why didn’t they leave for the town?

She wouldn’t leave because it was not her choice to leave. She’s from an old Turkish tribe and the last female keeps the parents. The rest of her siblings live in other areas of the country and have normal living conditions, and children and grandchildren. So, after her mother died, she moved. We helped her move. She’s spending summers in the hut but it’s important that she has the choice to go into the town in winter.

Watching her selling her honey in the market is fun. She’s a terrific salesperson and really enjoys the people.

She is very communicative. Even though she doesn’t have primary education, she speaks four languages- Greek, Macedonian which is Slovak, Albanian which is Indo-European and Roman. She learned all this from seasonal shepherds like the people in the film. 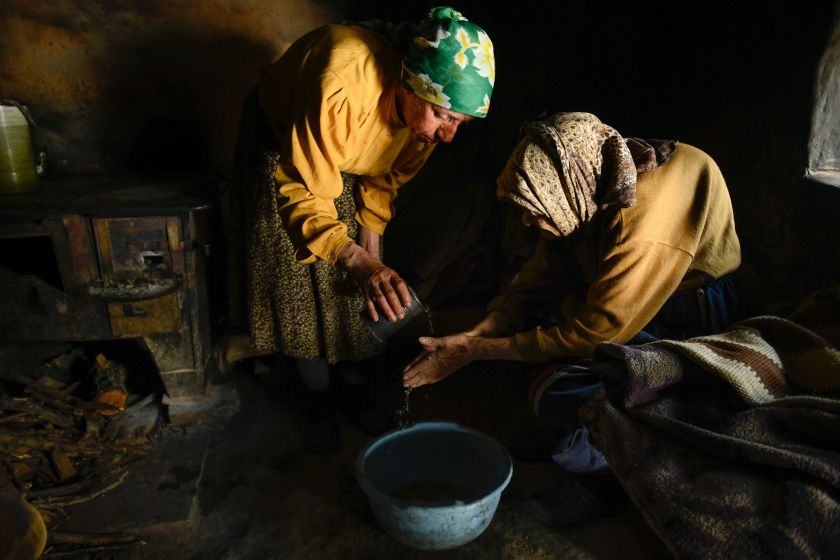 Hatidze Muratova and her mother, Nazife, in the movie “Honeyland.”

So, in the film, nomads with maybe seven children move in feet from her hut, rob her, destroy the place and kill her bees.  Aren’t there laws to protect her?

Do you think the nomads are rich?

They are rich, they have 150 – 200 cattle. It’s their choice to live this way, seasonal. They live in the town in winter, they have a house and the children go to school, in fall, winter and spring. But to live like this in the summer is their choice, their way of life.  They have a lower cultural level, not lower economic level. They are from the pre- Ottoman tribe the Yurks that go back five hundred years.

There’s a moment when you capture an airplane trail overhead, a stark contrast to her life on the ground.

The airplane demonstrates that there is an airport pretty near, 70 km away.  Her area was abandoned a long time ago in World War II and its not interesting for anyone to live there. There was no interest to bring in electricity or roads.  It’s only used from time to time by shepherds with cows who come seasonally. 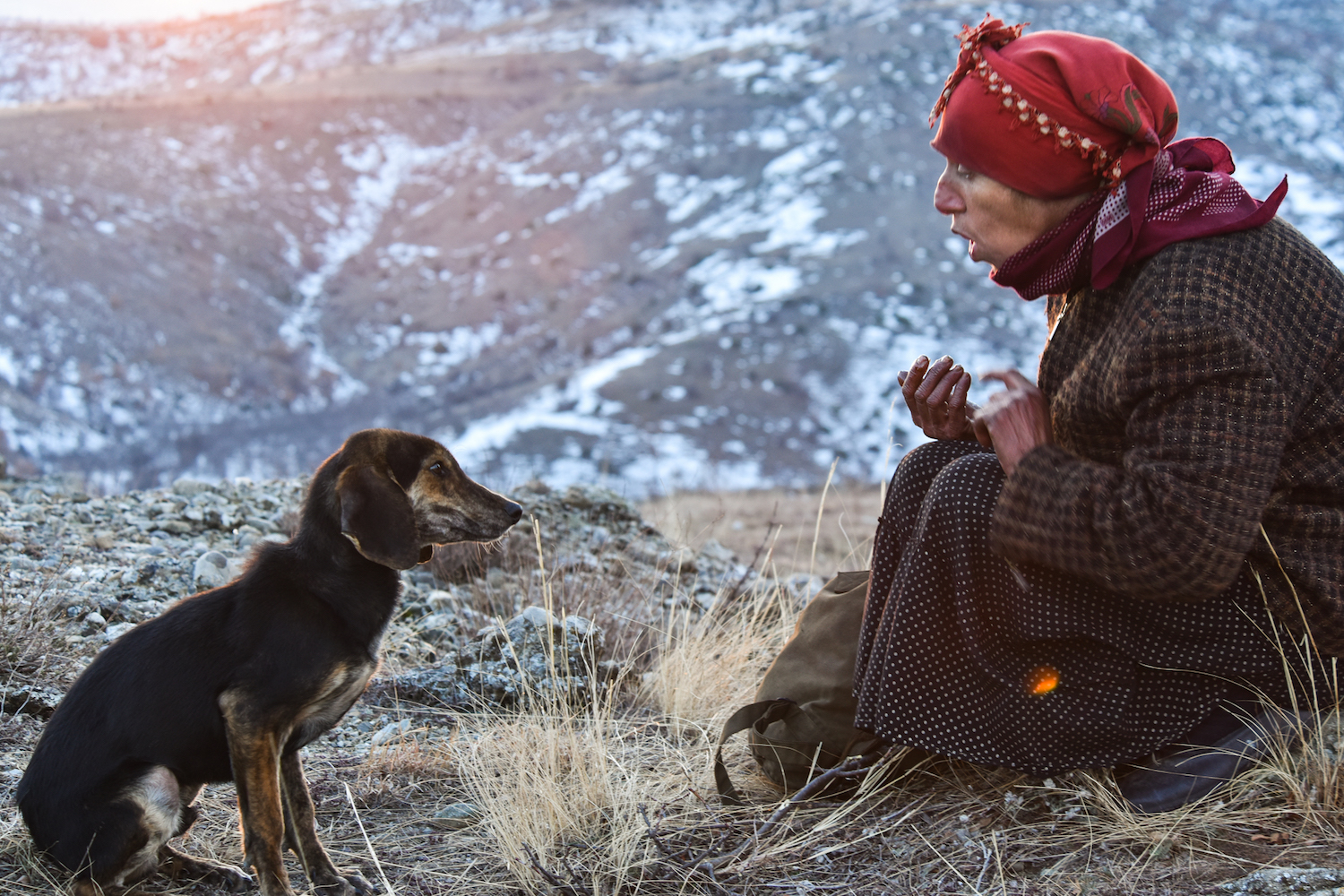 Her mother’s death occurs during the filming, that’s a huge change and a sad event for her.

She doesn’t take it tragically.  That’s why we chose her, we didn’t want to show a tragic human story. On the contrary, what we think is tragic, isn’t. We are the ones who are completely crushed.  Her spirit motivation is visible in the last scene when she talks to the dog.

Did you take her to film festivals?

Yes, we will take her to Turkey in September and then the US in October. Today she is in Skopje at a party given by the Swiss Embassy. They’re celebrating the 25th anniversary of diplomatic connection with Macedonia. She is the guest of honour.

« Quentin Tarantino Messes with Us for the Ninth Time, a Canadian Space Tale Character Study About Longing, The True Story of the Hunt for Jihadi John, Female Led British Military Series, and Veronica Mars is Back in Town
Even More Sixties Nostalgia as We Await Woodstock’s Fiftieth Anniversary, Films Tackling the Middle East, One with Humour and One with Hope, One from the POV of a Spy, Lucy Lawless is Back, Baby and David Lynch at Lightbox »