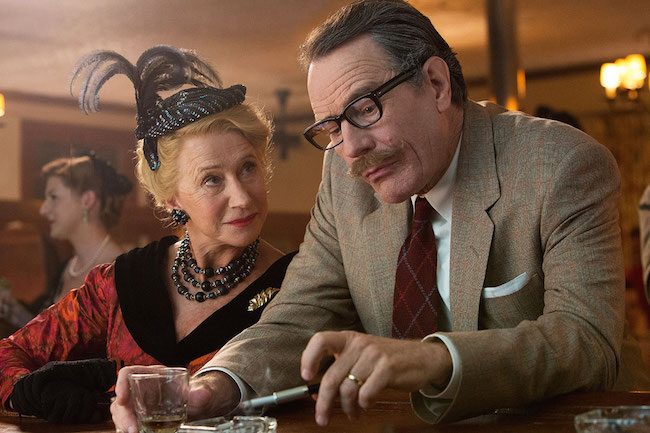 Bryan Cranston is the conscience and muscle of Trumbo, a surprisingly sunny, funny and witty look at the dark days of the Hollywood Ten Communist blacklist.  Renowned screenwriter Dalton Trumbo traversed the shark infested waters of supressed US civil liberties that had the country in its grip from 1938 – 1975.  And yet California has never looked sunnier or brighter. Nice contrast.

During the Cold War following World War II, America and the Soviet Union were in a hair-trigger nuclear standoff.  Anti-Communist campaigns were launched by the US government overseen by the House of Un-American Activities Committee under the United States House of Representatives.

They zeroed in on the Hollywood movie industry because of its influence over ordinary citizens to make a point. Communist or socialist sympathisers would not be tolerated. They would be hounded, subjected to public grilling, imprisoned and lose everything. Three hundred movie creatives were boycotted and many were imprisoned during bitter semi-hysterical hearings in 1947.

Trumbo was a leading screenwriter with 69 screenplays including Bill of Divorcement, Kitty Foyle, Roman Holiday, Spartacus and Papillion, considered one of the greats. But once the Un American Activities people had him in their sights he was just another Commie.

It was a ludicrous idea that Communism would take hold in Hollywood where swimming pools, mansions and Bentleys were not exactly socialised. It was about the suppression of citizens who met and talked about creating a better society.

The actual Communists the Soviet Union had nothing to do with Trumbo, or Lucille Ball or any of the big names who flirted with the romance of social equality. It was a kind of mass paranoia encouraged by HUAC.

Cranston plays Trumbo as a magnificent thorn in the side of political right. His magnanimous personality, keen powers of persuasion and gift of the gab kept him safe for a while, but Hedda Hopper (Helen Mirren) had it in for him – and if anyone in Hollywood was influential, it was the brittle, scheming Hopper.

Trumbo was the subject of whisper campaigns but continued to speak openly about his politics. In one cringe-worthy scene, he’s challenged by right wing reactionary and blowhard John Wayne who director Jay Roach says was an amalgam of real life Hollywood stars, including Wayne.

Trumbo came up with clever and outrageous schemes to keep on writing, bringing his family in as his co-conspirators. He knew victims of the blacklist and what became of them and he knew the people who named them. He realised he was in danger but had the fortitude to carry on with his life as a “swimming pool Communist”.

Soon he had to face the music.

Edward J Robinson (Michael Stuhlbarg) was friendly with Trumbo and other socialists, but when word leaked out, work dried up.  He sold his art collection and ultimately named names.

Trumbo looks at a shameful moment in history when people could no longer trust their government. It’s lighthearted and really funny at times and looks gorgeous. California has never looked so hopeful or beautiful.  I guess a spoonful of sugar helps the medicine go down.

« Black Friday 101: When to Spend and How to Save
4 Habits to Embrace If You’re a Woman With Type 2 Diabetes »