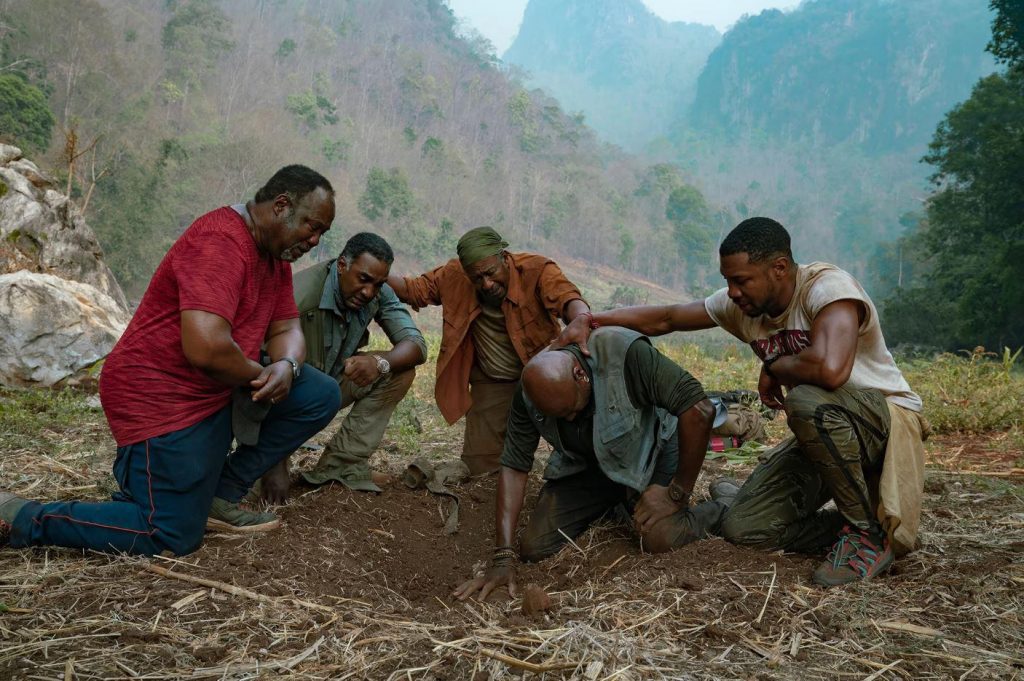 Spike Lee looks at the tragic history of African Americans in US wars in his stirring 2.5 hour Da 5 Bloods. Set within the story of four Vietnam veterans (Clarke Peters, Delroy Lindo, Isiah Whitlock Jr., and Norm Lewis) returning to ‘Nam to claim the remains of their comrade and a cache of gold bars they hid, it’s a far-reaching dirge for black soldiers sacrificed by racist policies of the US government. Lee moves seamlessly between 1968 when the men are in-country and their return twenty years later bearing scars of that war. Each man faces his own burden, but one is deeply traumatized by his experiences and repeatedly triggered. The magnetic young actor Chadwick Boseman plays a ghost, their fallen friend who inspired them (“like MLK”)  in ’68 and gave them hope but died in battle.  Lee follows the survivors into the jungle they know so well, as they catch up and reminisce; Lindo’s son (Jonathan Majors) tags along uninvited, worried about his father’s mental state. They team up with a woman they knew and a sketchy Frenchman (Jean Reno) to move the bars, but all of this is secondary to the central truth of the film, the systemic racism throughout American society the past four centuries; the son delivers a blistering poet rant against the current “Klansman in the Oval Office” and Trump gets the attention he truly deserves.  Lee intercuts historical facts, photos and archival video of black sacrifice in war – and peace – that came “without recompense” and delivers with the elegance, depth and intelligence we expect from him. Lee also and he pays tribute to Coppola’s monumental Vietnam story Apocalypse Now. On Netflix June 12.

SNL breakout player Pete Davidson’s profile’s been raised for some wrong reasons of late – a turbulent relationship with Ariana Grande, his admissions of Crohn’s disease he finds “so embarrassing” and manic depression, his tragic loss as a child and vicious social media trolling he’s taken. But he’s a talented comic actor, turns out, spanning a wide range of situations in the semi-autobiographical coming -of-age-at-24 film The King of Staten Island aided by co-writer and director Judd Apatow.  Davidson plays Scott who lives in his mother’s (Marisa Tomei) basement, depends emotionally on his sister who “abandons” him for college and mirrors Davidson’s real-life tragedy, the loss at a young age, of his firefighter father in 9/11. The character’s palpable pain defeats him and he lives a stunted life. He aspires to be a tattoo artist but uses a nine-year-old as a model, gets reamed by the kid’s father who then dates his mother and then takes over the household and boom – Scott’s kicked out.  Sounds funny/grim but this showcase for Davidson – and Staten Island – and also seems cathartic. There are extremely difficult and deep moments and funny/whimsical moments, but there is no real mirth. It’s a study of the human condition of a pot-smoking, depressed, unmotivated, stuck “middle-aged” 24-year-old.  Ballsy move, boys.  Messy start but there is genius in this film. Davidson co-wrote the film, dedicated to his father, with director Apatow.

BritBox in partnership with the BBC has gathered a comprehensive collection of filmed adaptations of Agatha Christie’s works for her countless fans. The number one mystery bestseller of all time produced sixty-six detective novels and fourteen short story collections featuring  Hercule Poirot and Miss Marple, and the play The Mousetrap still running in London without pause since 1952.  The fun begins on June 12 with Why Didn’t They Ask Evans? the classic comedy thriller in which Bobby Jones (James Warwick) and Lady Frankie Derwent (Francesca Annis) solve the mystery of a dying man’s last words, “Why Didn’t They Ask Evans?” Sir John Gielgud, Joan Hickson and Eric Porter co-star in this puzzling tale of murder, suspense, intrigue, and false identities. The collection features two million minutes of mystery, with Margaret Rutherford, Geraldine McEwan and Julia McKenzie as Marple throughout the years and David Suchet and Peter Ustinov as Poirot. Show will be released throughout the summer, starting NOW! 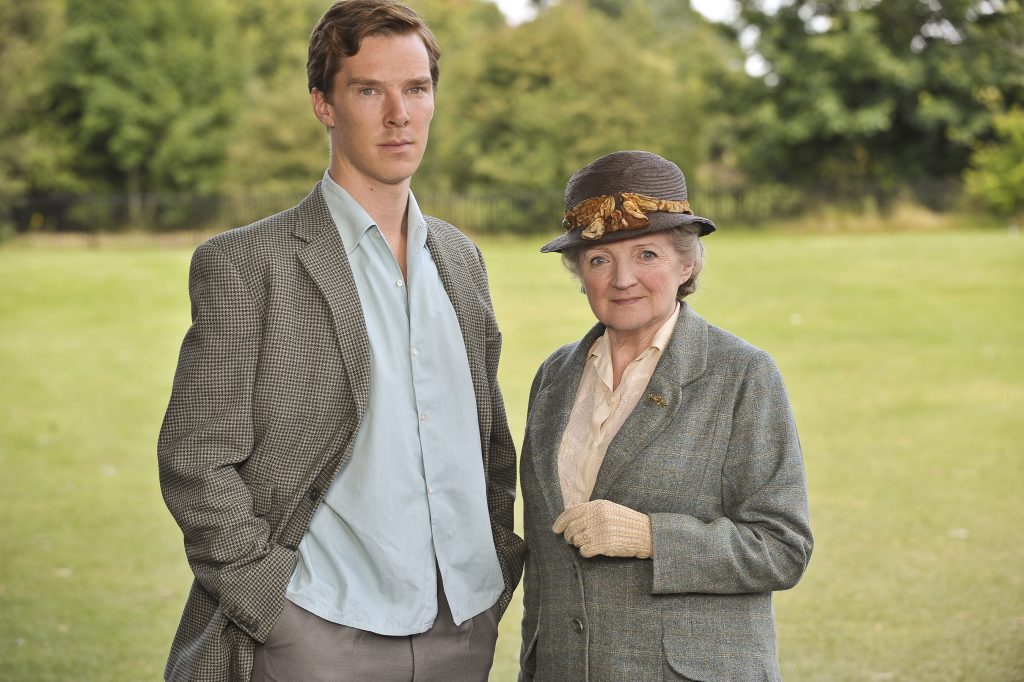 Miss Marple charms her way into the peaceful village of Wychwoodunder- Ashe to investigate a series of murders, and is befriended by Luke Fitzwilliam (Benedict Cumberbatch  Atonement), a handsome former policeman. But amongst a succession of sudden deaths, and a local election, Marple prepares to deliver a secret so shocking the village will never be the same again.

Craig Zobel’s The Hunt, which flows from the rich landscape of Agatha Christie’s Ten Little Indians, is given the ultimate 2020 horror update merging a deep political divide and some poor suckers who make themselves targets. Actual targets. Emma Roberts who looks for all the world like Ivanka Trump wakes up in a field gagged and under fire. She’s not alone, a terrified group of hostages is in the same boat. A striking and ultra-confident blonde (Betty Gilpin) emerges, cool as a cucumber, a warrior capable of battling the invisible threat.  We don’t see much of star Hilary Swank, but when we do, we see her dish out the pain.  It’s not often that at a press screening you hear seasoned critics gasp when someone is violently dispatched but yup, they went there.  Cool, fun satire. We press screened this just as COVID 19 shut down theatres, so not a lot of folks got to see it.  Now’s your chance available on VOD and DVD.

If you think your children experienced huge emotions watching Frozen, get a load of the filmmakers featured in Into the Unknown: Making Frozen 2 now on Disney+. The series begins 11 months before Frozen 2 is to be in theatres and as the crunch is on, tensions mount. It’s a good problem.  Each maker, director, tech producer, actor, singer, musician, character creator and writer is engaged and hopes to match the success of the original film. After all, they say Elsa, the Snow Queen, and Anna are family; one director writes a journal in the character of Elsa to know her better. The series goes behind-the-scenes at Disney’s animation studios in Glendale California where each key maker is followed by a documentary camera.  It’s not all smooth sailing, but it’s inspiring to see how they resolve artistic differences with respect and love. Kristen Bell, C and Josh Gad perform at the mic like champs perhaps inspiring young ones to pursue futures in performance, filmmaking, animation, and technology.

The doc You Don’t Nomi on VOD parses the widely disdained 1995 clunker, Paul Verhoeven’s Showgirls arguing that it cannot be considered junk. https://www.imdb.com/title/tt0114436/awards?ref_=tt_awd  Toronto author and film professor Adam Nayman, (It Doesn’t Suck: Showgirls) has defended Showgirls for years for reasons he reiterates in this film. Nomi, the lead dancer played by Elizabeth Berkeley could dance and tease, but could she reason? If you have time and care to have another go at it, knock yourself out.

Tanya Wexler’s Buffaloed starring Zoey Deutch, Jai Courtney and Judy Greer,  was shot in Toronto but takes place in Buffalo’s seedy debt collection underworld.  Deutch plays an overachiever hustler who finds her niche in this déclassé milieu and through mad skills becomes an overnight sensation, earns major money and becomes the target of violent rivals. A 98-pound girl against armed thugs? Peg’s wit and cojones outweigh theirs, if I may be so coarse’; she studies finance and the law, takes no tech chances and immerses herself in the practical and philosophical aspects of debt collection. Kind of interesting, a comedy thriller writ small, but Deutch is entirely entertaining as a gifted upstart.  Also stars Judy Greer, Jermaine Fowler and Noah Reid from Schitt’s Creek.  On Demand.

Oscar contender Corpus Christi from Polish director Jan Komasa is a haunting portrait of Daniel, a violent convict (Bartosz Bielenia) who finds his niche on the outside posing as a priest. His spiritual awakening in youth detention gave him the desire, but his criminal record forbids it.  But it doesn’t stop him serving in a rural community; he craves religious transformation. He must slide in and out of various personas depending on circumstances, a remarkable and duplicitous accomplishment he easily pulls off. Daniel’s charm and manipulative nature no doubt played parts in his crimes, but he believes he’s now using his “gifts” to honour God by testing his dedication to find forgiveness.  Absolutely fascinating character study; we want him to succeed, but are we complicit?  An engrossing moral puzzle. On DVD and VOD.

The chilly Hammer horror-thriller The Lodge stars Elvis Presley’s granddaughter Riley Keough as a woman raised in her father’s religious cult; he’s played by her father, Lisa Marie Presley’s ex Danny Keough. As the cult leader, he prayed his congregation into mass suicide to atone for their sins and he and Riley’s Grace were the sole survivors.  He sends her sent out to evangelise, the hook on which this snowy noir hangs.  She’s engaged to Richard Armitage’s Richard. He tells his wife (Alicia Silverstone) he’s divorcing her and she takes her life. Grim start.  Cut to Grace, Richard and his resentful son and daughter in an isolated mountain cabin for Christmas holidays.  He’s called back to work leaving the three behind to sort their differences in howling winds and blizzards. The kids prank her; she struggles to stay sane as her medication and dog go missing.  The underlying cult damage roars out; and she disintegrates. As far as horror goes, it is a tad slow repetitive, a trifle, but Keough is convincing as an interloper under fire.  Also points for bravery for her scenes in the frozen lake! On DVD and VOD.

« Getting Social With Stephanie March from The Social Ones
Anne Brodie Interviews Bryce Dallas Howard, Director of Dads »