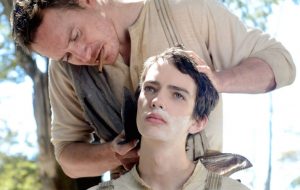 Slow West is a fresh and intriguing Wild West / noir crime drama set in America in the mid 1800’s brimming with mystery and beauty.  It’s the story of innocence corrupted, minds and lives lost and the unrelenting threat of the world around us, as beautiful as those wide open spaces.

Kodi Smit-McPhee plays Jay Cavendish, a young Scots boy who loves a village girl known to lead a difficult life.  When she and her father suddenly leave for America, he determines to follow her.  He set out alone with money but no plan or knowledge of the new world and its vast, emptiness.  He will walk across the frontier to the west.

He is also unaware that his girl and her father are accused of double murder, although he had some hint that she may have been deadly by nature in her statements about the “delights of violence” and her repeated mimes of killing him.

Early on, he is nearly killed by bounty hunters and Indian hunters and then the set upon by the Indians. Nowhere is safe for a slight boy traveling alone with a pocketful of money so he creeps through the woods.

Michael Fassbender appears as an outlaw who appears to be kind, and offers to take the boy west.  The boy doesn’t realise he is a remorseless bounty hunter pursuing the girl and her father. They set off marveling at the unspoiled world around them and things go smoothly – for a while.

Then Slow West turns into the Odyssey, as they encounter mysterious figures along the way.  These are clearly defined good and bad characters and he is the focal untarnished soul and potential sacrificial lamb that must recognise the world is other than what he is. He must try to keep it at bay and its monsters even if they wear clerical collars or offer him shelter in the middle of the endless hot salt plains. People in these open spaces are hard boiled and merciless, and he learns as he goes.

Smit-McPhee is a sensation, the talent so present in Let Me In and The Road is in place as he takes in this strange world, struggles to keep himself alive and moves towards the girl he loves.  Fassbender provides a stark contrast in character, appearance and motive.  Ben Mendelsohn the hotter than hot Australian actor, is a powerful presence even if he is only in the film for moments.

Slow West is clearly a low budget film but that has no effect on its poignancy or authenticity.  Speaking of which Scottish filmmaker Maclean says he studied works written during that time including the books of Laura Ingalls to ensure he was offering an authentic look at the way life was lived in those pre-law expansionist times.

The film has a keen sense of majesty and respect for nature and the human heart the way Days of Heaven showed us deceitful love in the open plains and There Will Be Blood and its monster that hides in plain sight.

Slow West harks back to its cowboy roots and its noir inspiration for its strong moral core.  Every evil act committed is paid for in a breathtaking final act.

« 5 Savvy Wedding Spending Tips by Sandra Hanna, Co-founder of The Smart Cookies
What She Said Theme Song – by Farahri »