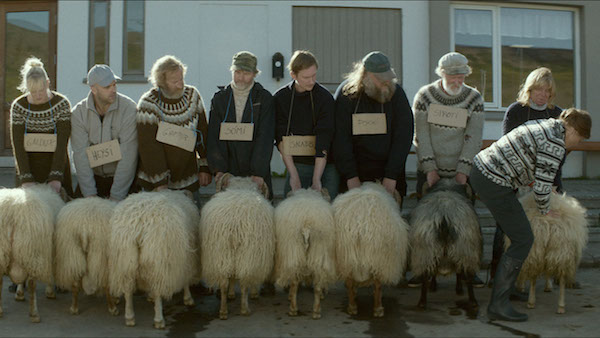 Written and directed by Grímur Hákonarson

Sigurður Sigurjónsso’s Gummi dominates this harsh, bleak but deeply moving Icelandic drama, insofar as anything besides nature dominates.  He’d in his late sixties or early seventies, he’s wind whipped, isolated, mourning lost relationships and grateful to have a flock of sheep to care for.

He’s a shepherd as is his brother who lives several hundred metres across the field. Their herds are their families, sons and daughters, friends and reasons to live.

Gummi and Kiddi are getting on in years, and the harsh environment of the rugged landscape has aged them but made them intensely independent. The elements regularly beat them into submission but they’ve survived seven decades but to be sure nature is the mighty lead character.

Gummi and Kiddi haven’t spoken for forty years. One has to pass through another’s road to leave the farm, and they have a dog trained to fetch notes between them if there is an urgent matter.  Beyond that they are separate, inviolable, proud and stubborn. Kiddi drinks.

The brothers participate in community life, separately, it’s understood in town that they don’t connect and tension mounts as they compete in the annual best sheep contest.  Sheep from their farms are renowned for their vigour and quality.

Kiddi’s sheep beat Gummi’s by a hairs breadth but win they did and Gumi leaves the town hall to be alone.  As he passes Kiddi’s herd he notices the prize winning ram acting strangely.

He examines it and finds evidence of the deadly and highly contagious disease scrapie – a fatal, degenerative disease that affects the nervous systems of sheep and goats related to bovine spongiform encephalopathy “mad cow disease” and chronic wasting disease of deer.

Gummi reports it but Kiddi says he’s making trouble because he’s jealous of his second win in two years.

The mayor brings in government animal health experts who examine the animals, stalls, barns and soil – where it holds – and discover the disease has indeed landed on Kiddi’s herd.

That means the entire sheep population in the valley must be slaughtered and that would be the end of their honoured line of animals.  It is an unbearable fact for the brothers because it also spells the end of any significant relationships in their lives.

What follows is Gummi’s attempts to rescue the animals. He leads with his heart as the government agents bear down on his flock. It’s organic and realistic, but his acts of intended mercy turn into tragedy of Shakespearean proportions.

The film gives us pause to reflect on the limitations of life and what we can bear. There are lessons to be learned and reminders that family is important, and so is love.

The films apparent simplicity gives way to complexity as the brothers ponder their lives under sudden, traumatic change.  And once again, as the films tell us so well, nature is in charge.  It’s a deep well.

Rams isn’t a film for mainstream audiences but cinéphiles will appreciate its execution, beauty, minimal scripting and the deft performances by all.

Don’t miss this one!

« Quickie Guide to V Day: Navigate the Dating and Relationship World in a Healthy and Empowered way with Victoria Lorient-Faibish
Free double passes to Touched With Fire starring Katie Holmes »