Louise Archambault’s touching film And the Birds Rained Down, based on Jocelyne Saucier’s 2011 novel, was named to TIFF’s Top Ten Films list. It opens in theatres across Canada this week.  It follows elderly hermits (Kenneth Walsh, Remy Girard and Gilbert Sicotte) who live off the land in a heavily forested area of Northern Quebec. Wildfires are burning and they’re in its path, and in danger of being evicted and put into government care. A woman joins them, a nursing home runaway, and we watch them live their lives, the ones they chose. Archambault’s intimate portrait examines old age and social and environmental issues with great compassion in a film that’s stunningly beautiful. I spoke with Archambault from Montréal.

Louise, did you adapt the book to the screenplay with Jocelyne’s help or on your own?

When I read the book loved it and grew on me and I was still thinking about it months later and those characters and the kinetics of it. I said I have to do something like that, then I met Jocelyne. I approached her and the editor, and said gosh I would like to make a film and we talked. She’d seen my film Gabrielle and she loved it, especially the love scene, and said it was very sensitive and so she gave me carte blanche. But she didn’t want to be involved.

We did talk about Marie who is loosely based on her aunt who experienced that. The book is dedicated to her aunt, it was important for me to know the relationship and who she was and all her research. She sent me papers and some books about the Great Fire. I wanted to go more mainstream than the book so I had some filmmakers read the script and give me advice. Then Jocelyne read two versions and gave me the stamp of approval. She came to the set while I was shooting in the forest for a few days. But she was there as a spectator and met the actors.  I think we worked in a great relationship.  Another way to tell the core of the story and perspective is the actors. These people gave a part of themselves.

Marie, Jocelyne’s real-life aunt, lived her entire life in care, in dormitories.  Finally, she won her freedom and lives in the woods with the men. Amazing.

I don’t have that wisdom to know if she was happy. I’m trying to understand and present the moment.  When we talked about those characters, they chose the life, ok.  Maybe it was tough sometimes, and not much food and they were old and had to cut wood and get food. Sometimes you feel lonely and want to talk to someone. But no chance, they chose that life. When you have the chance you saying to yourself, I do choose my life and companions and my work and maybe it’s imperfect, but I accept it.

The hermits are played by marvellous veteran Canadian actors. They let us understand the reasons the characters chose to live in isolation away from society.

They are so great actors and all of them researched. One was quite nervous, he said he’d have to work out, train and make muscles ad eat right and immerse himself in that character. And then when they shot in the forest, it was there. Gilbert and said you’re there so you don’t have to force things. You have moose, animals. And Girard loves to go in the forests a lot, he’s a fisherman.  And then someone older, and skinny and alcoholic. I know Tom, and how he suffers about things. He’s also a great singer. He said he’d do everything to make it the truest work he could do.

The film is incredibly timely with the forest fires.  The title refers to the phenomenon of birds falling because they can’t get enough oxygen due to the wildfires.  It’s about impending change and death and not being safe.

We’re not safe. It’s very newsworthy. We talk about that a lot now. In the novel, the Great Fire was a long time ago, for my story its 2019, so it generic. Northern Quebec, the frontier with Ontario.  What matters is the elements. We are vulnerable and must take care.  We have to be humble and take care of that beauty. We are surrounded by beauty. 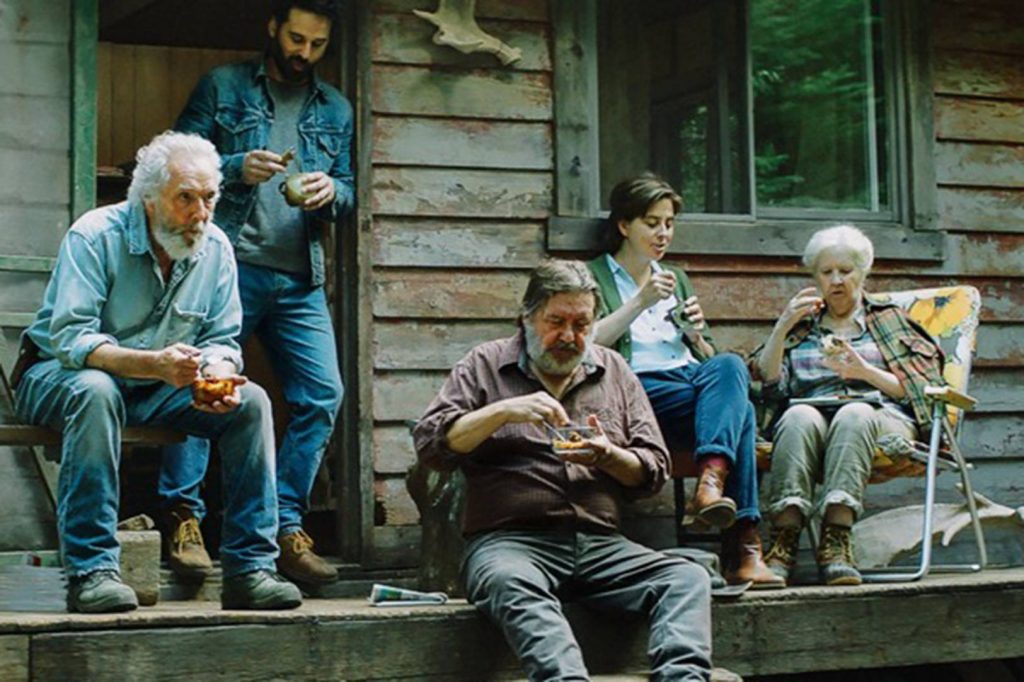 ‘And the Birds Rained Down’

How was it working in the deep woods for the length of the shoot?

It was great because the forest was a character by itself. The cinematographer didn’t have to fix things, the kind you get when you’re shooting in cities or suburbs, the sounds. We didn’t hear planes, we didn’t have to plant trees. Its what was there, a virgin forest that is so beautiful, so raw, rugged. Authentic.

Then again, we’re in the forest so there is no electricity or running water. The actors were between 70 and 87 years old. Just to go into the living quarters, dormitories, like a monastery or a prison. We built the cabins and it took fifteen to twenty minutes to drive a four-wheeler to the location.

But it gives us a structure, all the actors really wanted to tell that story. Andrée Lachapelle loved the experience and was grateful to be there. For three years she didn’t work, taking care of her late husband and then every day she was coming back to life. She said it was as if she was coming back to life to see the beauty of things. And it was her first ever love scene, at age 87. Sadly, she died last November.

You’re heavily involved in directing major TV series. Was it nice to get back to film work?

So good.  It felt good, I love to tell stories over an hour and a half or two hours and tell the whole story, the roller coaster ride, the birth of emotion and to take that ride. I love it, and the occasion to be on the big screen with those images, especially this film. I want to feel the texture and scratch and sniff the forests.  We never had enough time, I would like to have had 30-35 days to shoot, but we only had 26. I’m not like Xavier Dolan who demands 89 days! It was crazy!

And the Birds Rained Down opens this week. Are you nervous, stressed? excited?

I can’t change anything now! I have to let it go.