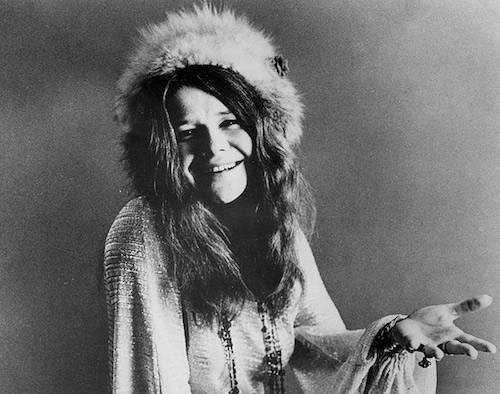 Oscar-nominated director Amy Berg (West of Memphis, Deliver Us From Evil) points her lens at that star that shone brightly and then was gone, that wonder of female rock and roll, Janis Joplin.  From her uncomfortable roots in Port Arthur Texas to her undisputed place at the top of the music world to her tragic death, alone in an LA hotel room, at age 27, Berg remembers and offers new insights, both from Janis’ letters and from exclusive interviews with friends and family..

Janis’ incredibly flexible, expansive and emotional voice and style remains unparalleled.  Her songs “Down on Me,” “Summertime,” “Piece of My Heart,” “Ball ‘n’ Chain,” “Maybe,” “To Love Somebody,” “Kozmic Blues,” “Work Me, Lord,” “Cry Baby,” “Mercedes Benz,” got under the skin, but only “Me and Bobby McGee” hit Number One in the charts.  She was the Queen of Rock.

Janis was a rebel growing up in Port Arthur, bullied not just for her unconventional appearance but also for her left leaning politics.  Port Arthur had its own chapter of the KKK and Janis, a highschooler who didn’t dress or act like the others, called for racial integration.  She was named the school’s Ugliest Man in a vicious newspaper article.

Janis liked “coloured” music and sand and played her own instruments. She hung with outsiders and musicians, a self-confessed wild child, but felt keenly the lack of opportunity and kindred spirits in that closed, tiny burg.

So how did this downtrodden teenager morph into one of the greatest musical artists? Berg’s film doesn’t pretend to answer that question definitively but offers clues and statements from associates throughout her life, from presumptive lover Country Joe McDonald, lovers Jerry Garcia and Jae Whitaker, band members, managers and agents, childhood friends, a comprehensive, exhaustive round up of Janis’ intimates.

Berg relies on letters to and from Janis and her family, an interesting strategy because the readings (by Chan Marshall / Cat Power) actually sound like Janis’ voice speaking.  She wrote home constantly and craved acceptance from her parents, brother Michael and sister Laura – who both appear in the film – doting on them till the end.  She asked their opinion, apologised for what she perceived as her transgressions, and expressed her love.

Previously unseen archival footage is mixed with more familiar film of Janis wowing Mama Cass Elliott, kicking her shoes off, and flailing hair, legs askew, singing one heartbreaker after another. Intimate footage of Janis in her San Francisco home passing time with fellow musicians, doing the same thing on the famous Festival Express musicians train trip across Canada and just hanging out certainly mirrors the time and gives glimpses into the duality of Jani, extreme shyness versus extreme extroversion.

Her on and off drug problem is addressed. Apparently it began in her teen years in Port Arthur and came and came in and out of her life until the fatal final heroin dose.

Janis: Little Girl Blue is strong stuff that brings back the nostalgia for that time, with its positive and negative elements.  It was a time of change and sadly Joplin didn’t live to see the good changes her generation set in motion or her music achieve lasting relevance.

« Are Your Content Hungry? Tap into Your Customer’s Mind – by Vivek Raj Shivhare #VOOFA
David Bezmozgis’ Character Study Natasha Will Scare You – By Anne Brodie »