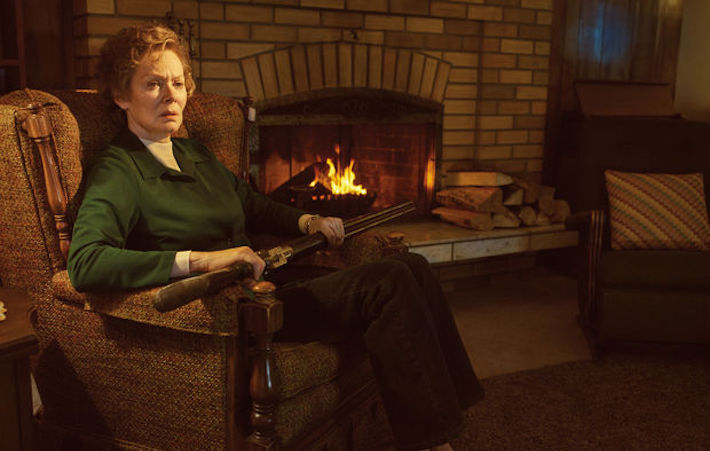 Jean Smart is the hard heart and soul of Fargo Season 2. As the series develops increasingly darker elements similar to Shakespearean tragedy, it comes down to a looming war between the Gerhardts, the rural Minnesota organised crime family and gangs from the south.  Smart is Floyd (that’s right) the leader of the Gerhardt clan who faces events a mother should never see or cause. It’s a difficult and brutal world. Having been raised as a man and with a will of steel, she runs the family business with cold precision. We spoke with Smart about her pre-feminism and getting Floyd down pat.

Floyd is such an intense great character, how did you see her?

It’s such a great show, the writing was unprecedented! You don’t get that very often and actors are hungry for those words.  You certainly don’t see a lot of female characters like Floyd.  She’s a throwback to another era but very strong. She wouldn’t refer to herself as liberated but that would be a word that’s accurate in 1979, it was on people’s minds, and on her mind for her granddaughter’s sake. Seeing her granddaughter going down a path in life she knew was going to be personally disastrous was hard. She’d always been pretty much an equal to her husband for better or worse, they were a very good team. And she grew up doing all the things a young boy would do – hunt, farm, ranch, shoot and she were not afraid of hard work. It made her liberated, back then she was. She does what she needs to do.

Is Floyd based on anyone?

She’s not based on anybody real. There is a true story aspect. There was an event that happened that Noah decided to use as the inciting event of the story. I was given so much in the lines that it was clear to me where I wanted to go with her. I did not ask Mr. Hawley why he named her Floyd. I decided to go with my own ideas of why, based on the kind of father and childhood she had. It’s kind of fun to come up with your own ideas. It was very easy and the script was my roadmap for her.

What did you add that was not in the script?

I would like to take credit for it, but I can’t really. When I first read the first script, the scene I auditioned with it gave me so much of the character that it was clear to me what I wanted to do with it and we had terrific directors. I felt very comfortable in what I had to do with her. Noah emailed me and I was drinking wine at the time! and asked me what I would think of Floyd smoking a pipe?  I said sure! But I wasn’t sure the next morning. What the heck? Yes.  It was just a perfect; I don’t know why he thought of that perfect unexpected personal thing about her.

In 1979 in that part of the country you probably were through of as old. In L.A. today it’s not considered old. They refer to her as the “old broad”, and I took offense.  She says to her eldest son “it’s not your time, I’ll talk to you when it is your time, I will hand the reigns to you and turn my thoughts to the grave”. She’s lived a long life but she’s not done yet.  She knows people would see her as old. What do we say now, 60 is the new 40, but certainly in the 70s in a farming community she would be sort of old.

How did you develop that distinct Minnesota accent?

We had a terrific dialogue coach. They wanted us to keep it subtle, especially the Gerhardt’s slightly different accent, which was perhaps a little more German.  The Fargo and Minnesota accent has been described as the “friendliest” accent around and probably in its usual form would not sit well with Floyd Gerhardt. Too chummy. I grew up in a community in Seattle that was Scandinavian so I hear my friends’ ‘parents and grandparents had heavy Scandinavian accent. That’s part of the flavour, not an unfamiliar sound to my ear.

I can’t overemphasise how important, more than any role I did, were the hair and makeup people. Actors often talk about the Method or working from the inside out but there were important things working from the outside in, how you feel about yourself and how you interact with other people. The first time they put in me the Floyd look, first cut and dyed my hair it was quite startling. That classic poodle hairdo that women wore then at that age. The wardrobe was amazing, not overdone, and it was subtle, we had such fun putting together outfits, we’d howl with laughter! OMG! We remember those things and can’t believe we actually wore them. There was so much polyester. My feet and head never got warm. I’d beg for hats every time we were shooting outside, they said no it made her look less strong. The coat was warm! And there is something about red – it stirs people’s feelings. Wish I’d kept it.

Michael Hogan one of our terrific Canadian actors plays your husband who is completely disabled, and spends 95% of his screen time doing nothing.

Michael Hogan is wonderful. Originally the Gerhardts were not in the first episode so the only time we got to see him was in the wheelchair with the blanket frustrating, but he was game. I was very pleased into one that Michael had that wonderful scene with the boys in the kitchen because he is obviously respected. He’s a lot of fun too.

Are you enjoying watching the show on television?

When I started watching I was so taken, I knew it would be good and the cast was amazing, I was so thrilled with the editing and music, those were particularly brilliant and enhanced the style of the show and the look and feel. It’s consistent and I’m constantly amazed even though there were three different directors that they nailed it. It was important to Noah they would have “tone meetings” before an episode was begun and it paid off.  It was fun to watch scenes I wasn’t in because I wasn’t privy to those and the humour, especially the Gerhardt clan. They’re a great bunch. I’m a fan of the extremely dark humour of the show.

« WIN a $150 HOLIDAY Basket from the Seasons Christmas Show in Toronto this weekend!
Pizza Recipe from Lidia Bastianich’s “Mastering the Art of Italian Cuisine” »