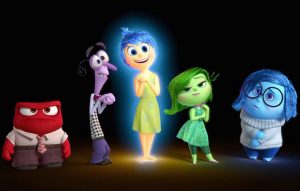 What is it that Pixar does so well that it has never mis-stepped? That each film it produces brings something absolutely fresh to the table and that Pixar attracts some of the finest talents in the business?  If I knew I’d have invested years ago and would be rich by now, instead I am writing this review for you.

And what a joy that is.  Inside Out is an amazing accomplishment as entertainment and telling truths, it goes where few films have dared. It speaks to children as equals, as significant and as intelligent and opens their minds to the function of their minds and emotions and how things work.  But it never gets too fancy – its within reach and it’s fascinating and optimistic.

Young Riley, Mom and Dad are relocating to the big city of San Francisco, leaving behind the idyllic rural world of Riley’s childhood – lifelong friends, an awesome hockey team, skating in winter and the fun and joys of the natural environment.

By the time they arrive in their underwhelming tiny house, Riley’s in a blue funk. Dad is often absent and frets about his new high risk job and Mom can’t get Riley to talk to her about why she’s so downcast.  She can’t form the thoughts or words to say she’s lost everything that’s important to her, even the seasons of the year and it feels awful.

If Mom and Dad could only look inside Riley’s psyche and understand the emotions pulling at her. We lucky viewers can though, through the magic of animation – Joy, Sadness, Fear, Anger and Disgust and the panels that oversee them are the psychological characters that populate Riley’s moods.

They act out her emotions and try to pull together to fix things. But sometimes Riley’s hurt is too big and it seems impossible to fix.  They embark on an adventure to save her from herself that takes them into strange lands, places on her emotional map.

The screenplay is sophisticated especially for an all-ages animated adventure; it goes beyond the barebones ideas of a clever script and cute characters. Psychological realities are made plain to us in a way that never makes kids feel dumb or too much into the realm of academics.

Every beat of the film is entertaining and rich, heavy on laughter and awe. The human mind is a huge canvas and according to Inside Out it can fix itself. It just means emotions must co-operate with intellect and reason.  It’s a big job to find peace again after you’ve been uprooted, but the film shows it is possible.

Hats off to Pixar for yet another and even greater offering that stimulate, entertains and teaches us a thing or two.  Learning can be fun and good for young people who may begin to understand the work that emotions do and pick up some tips on coping with them.