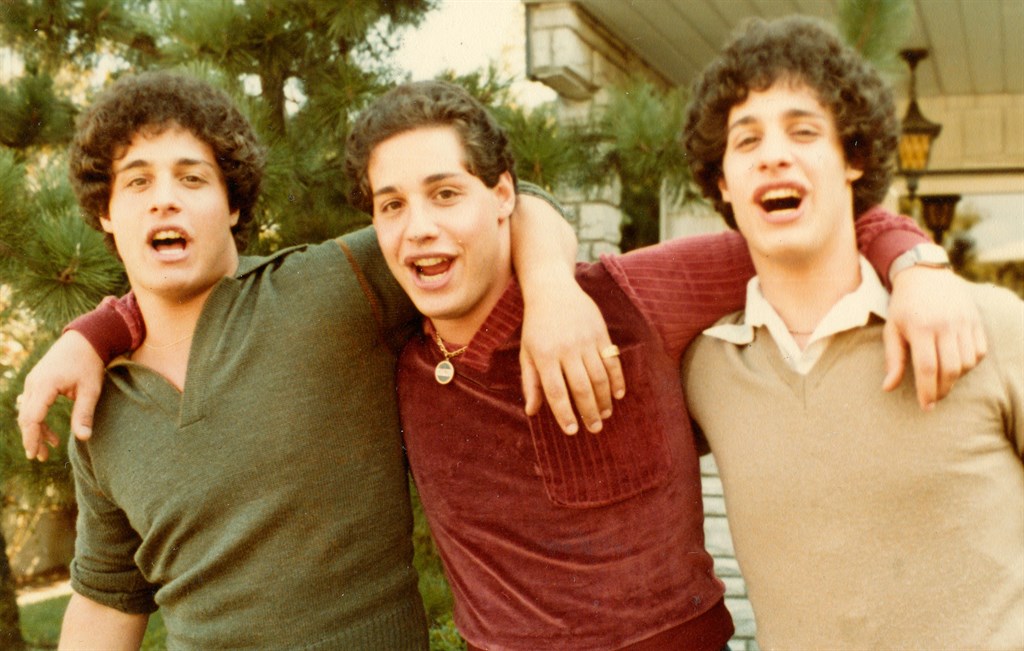 Award-winning British documentary filmmaker Tim Wardle has produced stories on law, crime and courts for television outlets in the UK and the US.  His latest project Three Identical Strangers begins in the upper New York State, and looks at three men, Robert “Bobby” Shafran, Edward “Eddy” Galland and David Kellman, from different cities who discovered at age nineteen that they were identical triplets.  Their touching reunion fired media frenzy; they were stars on the talk show circuit, they appeared in Madonna’s film Desperately Seeking Susan, and made the scene as kings of New York.  But as Wardle reveals in gripping style, an investigation into the reasons they were separated reveal incredible systemic cruelty. The Louise Wise Services, a prestigious New York Jewish adoption agency separated them to in order to study the social and psychological effects as an experiment. But little did anyone guess the extent of the emotional and psychological injury it caused the boys.  The experiment was top secret, partly because people who could have prevented it wanted to adopt from the agency.  Wardle pieces the puzzle together with the help of former agency staff, medical records and the boys’ adoptive families.  We spoke with Wardle. 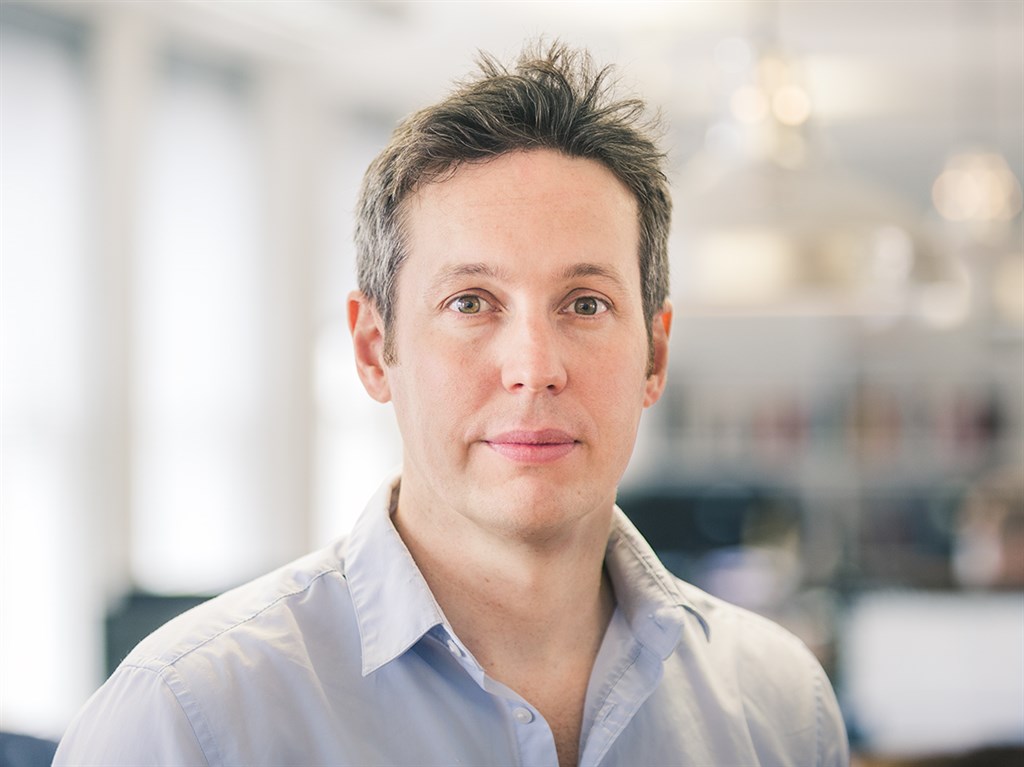 It’s unimaginable that the Louise Wise agency could harm so many children with impunity. Your film is like science fiction or horror.

That’s a massive compliment. We really wanted to play with genre and I’m a big movie fan and the idea of making a film that takes us on a huge journey was (appealing). The idea was to play with those genre tones.

How did you come to know about the triplets?

The story came across my desk. I’m constantly being pitched stories and you get to a point of being jaded; you’ve seen every story you can see.  There is nothing new under the sun. This was new under the sun.  We instantly thought it was the best pitch we’d ever seen. It was a compelling human story at heart but the background themes about destiny and family were incredible. It has a circular story most docs don’t have. There are still people in the study who were psychiatrists in New York, they’re still around, and some were involved and some more peripherally. I’m hopeful the beyond the film, things will continue to come out, long after I’m involved.

A former agency staffer you interviewed in La Jolla seemed inappropriately happy and excited talking about these horrific events.

The truth is we see both sides. Natasha was an assistant and wasn’t actually working on the study herself, but she knew about it she was our first one level interview, and I’m grateful she would talk about it. There are a lot of powerful people alive who won’t speak about it, including New York shrinks. Their argument is that it was ok in the context in the 50’s and 60’s with psychologists trying to establish standards for psychological testing, like the Stanford Prison Experiment and other famous ones.  From my point of view, I’m interested in grey areas, good people who were involved in unethical things.

I was amused by the icons on her mantelpiece, photos of her with Hillary Clinton and Obama and Al Gore.  She wasn’t a bad person. Very liberal, right thinking people were involved in this one thing.  Personally for me that’s what interested me.  Lawrence Wright the journalist talks about “noble cause corruption” why good people do bad things, the ends justify the means, and that was to further human knowledge and scientific understanding.  Even looking at the Phil Donohue footage and people in the audience are saying “I have a twin, one is retarded”. You would never say that today.  Historical context is important, there was lots happening in America in the 50’s and 60’s. The times can’t be ignored; it was a different world so there are valid defences. 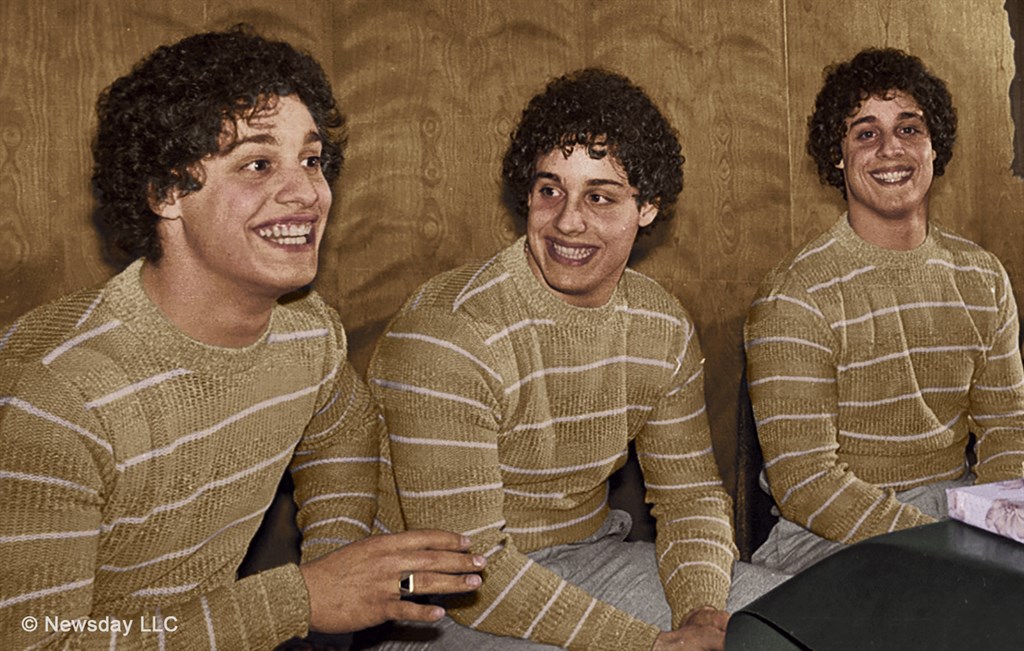 A scientist you talked to called it “Nazi shit” separating identical twins and triplets to analyse their responses.  How would you describe Peter Newbauer, the mastermind and his reasoning?

It was a different era, not like today’s informed consent.  His justification was that he was furthering scientific understand and knowledge and in retrospect they defend themselves at the time saying it would be advantageous to study them separately.  How would they individuate? There is no scientific evidence for that.   He had tried to approach other agencies and they said no.

Viola Bernard the chief psychology consultant at the Louise Wise Agency was primarily responsible for splitting up the children he studied.  Who did exactly what is unclear but it was unethical.  My sense was that they had inkling and perceived that it was unethical.  Only in 1980 was a law passed forbidding the separation of siblings, as a result of the triplets’ case.

What became of the doctors notes and research?

The boys have 10,000 pages of notes that are heavily redacted photocopies.  I don’t know if they have the seen some of the details of the things they predicted would have relevance to where they are now. It must be incredibly strange experience for them looking through the notes now.  The boys had serious issues related to separation anxiety and some bad outcomes.  They had to know there would be issues, but chose to ignore them.

The men became media darlings when the story broke. They were famous and they made a lot of money, but at what price?

It was a roller coaster of a life. Eddy’s widow Brenda described it as the duality of their life, the extreme high after the reunion and the lows. Would they have been better off not knowing each other? The feeling was no, absolutely they would experience the highs of the reunion rather than not know each other existed.

So it was a good thing?

What we found is that it is common for people reunited who were separated at birth, in quite a few cases the majority, the honeymoon period is incredible and then very quickly the relationship breaks down and they stop speaking. 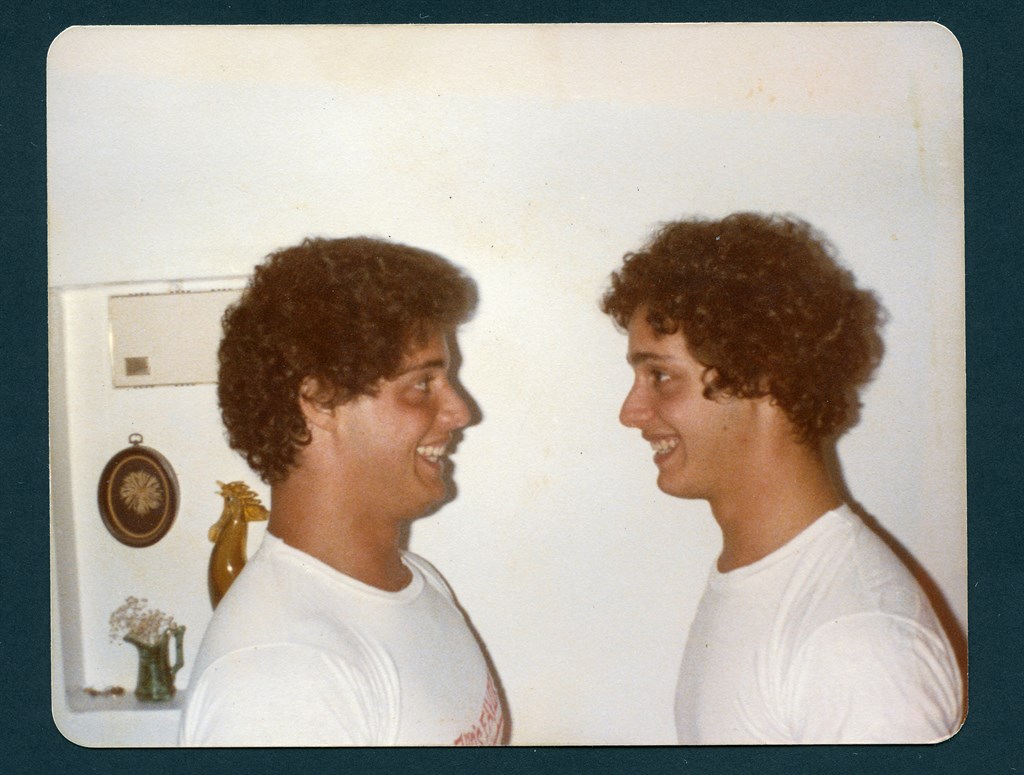 How are the surviving brothers?

It was fun to be around the boys, enormous fun.  It was an extraordinary thing, you talk about the reunion and you see the joy that comes over them.  Someone said “if you ask me, the purest expression of joy is when they are reunited and they are rolling around together on the floor.”  Is extraordinary that they can get back to that place and they get emotional talking about it.  They say it was the best time of their lives.

Do you keep in touch with them?

We talk to the surviving triplets; we speak a couple of times a week. That’s the wonderful thing about films, you develop relationships with contributors.

Have they come to grips with what happened?

They’ll never come to terms with it, shocking but there is a residual anger people in organisations that could have helped them and didn’t and that anger is still there. It hasn’t faded.  And reconciling with the family there was a lot of awkwardness but they told me that making the film patched up family differences.

How were you able to walk away when the film was completed?

I love the story more than any other I’ve been involved in. I am looking at the next thing; I’d like to do some narrative, drama, and docs. But it’s a hard time there out there and I’m so particular.  There’s a narrative drama being made of it in the offing at the moment.  I will stay involved but no more docs, five years takes a toll, other films took a greater toll but making it was tough, winning the triplets trust the whole way through.  They’ve been let down a lot by people. Earning trust and maintaining it was key. Until I showed them the film, there was some paranoia we had, first see the idea incredible before.

Why hadn’t a doc been made before?

People have made three attempts, two in 80’s, and one in 90’s was complete but it was shot down by higher ups, even though the main journalist was a three time Pulitzer Prize winner, one of the finest. There are a lot of powerful people like the story to go away and still there are people alive who have a part in it.