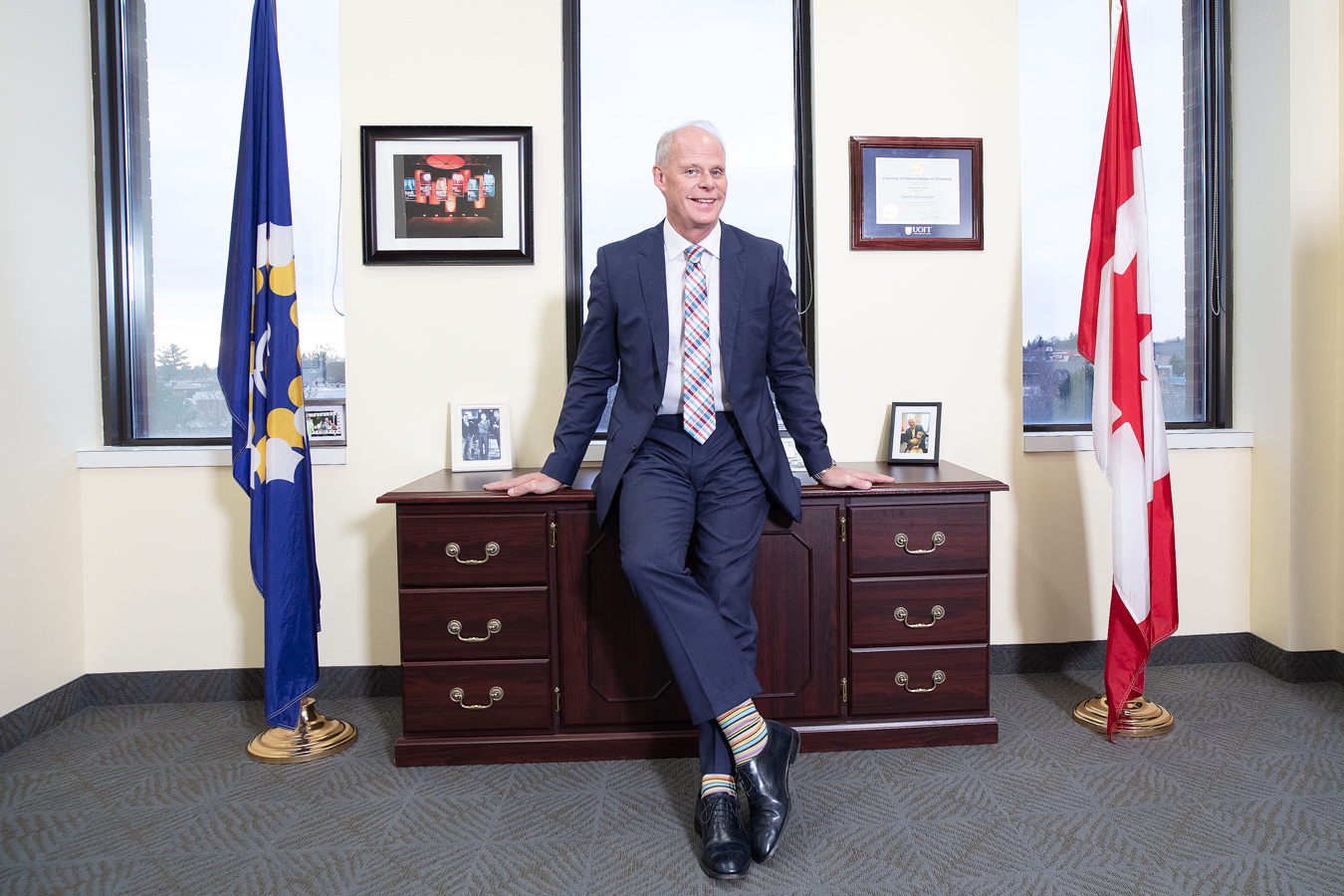 Oshawa’s new mayor once struggled with addiction and homelessness; now, he’s changing the way his city handles those issues.

If there’s anyone who understands the adage that whatever doesn’t kill us makes us stronger, it’s Oshawa’s new mayor, Dan Carter.

Just days before his December 5 swearing-in ceremony, Carter—and his city—were blindsided by the news that General Motors, historically the economic engine of the city, would be closing its Oshawa plant in 2019. GM’s almost 3,000 employees, countless workers in associated industries and the city’s new leadership would have just 13 months to retool their futures.

Dan Carter, a man seemingly tested since birth, was on trial once again.

His struggles began when he was just a baby. His mother died weeks after he was born and the family was too large—five girls and three boys—for his newly single father to manage. Newborn Dan and his toddler brother, Tommy, were sent to foster care. The boys were separated; Carter was eventually adopted and found unconditional love, but his new life wouldn’t be easy.

Though he wouldn’t be diagnosed until much later, Carter had dyslexia and failed several grades. In fact, he did not become fully literate until adulthood.

“I had left school in Grade 8 and was not officially diagnosed until I was a teenager,” he says. “I was ashamed, embarrassed—I had no self-esteem and a complete lack of confidence. I hid it pretty well for 18 years so I thought no one would ever know, but those feelings still haunt me today.”

Then, at eight, he was raped. Shivering with cold on his paper route, he took shelter at a gas station, where a man lured him with the offer of hot chocolate. Convinced it was his fault because he’d disobeyed his dad’s instructions to never go inside there, he didn’t tell anyone about this for decades, either.

Next came the death of his adoptive brother, Michael, in a motorcycle collision. Carter took his first drink at Michael’s wake. He was 13. It was the start of a downhill slide from alcohol to cocaine to crack to, well anything he could get his hands on. By the time he was 17, Carter was experiencing homelessness. He couch-surfed, lived under bridges and spent nights walking to stay awake until he could head to a local car wash, where he’d try to get work for the day.

By the age of 30, after years of addiction and street living, he was seriously ill.

In his self-published memoir, Right Time Now, Carter describes that period of his life, saying, “I’d lost all of my friends, most of my family, and… any hope I would ever change. I had no self-respect. I had lost jobs, relationships and everything I owned of material value. I had lost my faith, period—I was bankrupt in every aspect of my life.”

But there was one person who hadn’t given up on him: his adoptive sister Maureen. She tried one last time, slapping him upside the head and telling him, “Sober up or die, Danny. Pick one thing—I don’t really care which at this point—but whichever one you do pick, do it well.”

Carter made his choice. He got sober—Maureen arranged for him to go to rehab in Los Angeles, then, when he got back to Canada, he joined Alcoholic Anonymous. And then he kept going. He became a motivational speaker, a local broadcaster, a pillar of the community, a philanthropist and, in 2014 when he was elected Regional councilor for Durham region, a politician. Now as Oshawa’s mayor, a race he won handily with 69 per cent of the vote, he’s looking to his past for insight into creating a better future for his city.

“[I have] empathy and understanding of what the average person is going through,” Carter says. “Take the GM situation. Think about how [employees] feel—the insecurity, the fear of not knowing what’s next. I’ve been there. When it comes to our people who are living on the streets or dealing with the opioid crisis, of course I have first-hand knowledge, so I bring a different perspective to it. Believe it or not, I think I have been built for this moment, to be able to serve in this role. I don’t have all the answers but I think I can bring people together to find them.”

For 27-year-old Sam Powless, a lifelong Oshawa resident who attended Carter’s swearing-in, this once-broken man is the right leader at the right time, a man who exemplifies the words written on the city crest: “Labour and Prosper.”

“We are a tough people who find validation and prosperity in accomplishments that can only be achieved through hard work,” Powless says. “It’s in our blood; we have no other choice. And now there is work to be done. We owe it to one another.”

Now, Carter is working to secure a future of prosperity for Oshawa. He’s also driving change in the way the city deals with homelessness and the opioid crisis.

“I’ve already put through a mobile health unit that has a health worker, a crisis worker, a social worker and an addictions specialist going directly into our communities. We’re looking at some unique housing that will have wrap-around services,” he says. “I think we are going to be truly innovative in what we do here in Oshawa.”

Time and time again, Dan Carter has rebuilt his life. Now, he plans to use that same tenaciousness and grit to do the same for the citizens of Oshawa.

« New Theatrical Movies Few and Far Between, True Detective Season 3 at Last, Streaming Takes Over and Some Very Cool VODs
Hollywood Dishes Out Murder, Mayhem and Misery But Read on to the End. We Save You from the Midwinter Doldrums with the Help of Agatha Raisin »