It’s “The” trip to Italy not “A” Trip to Italy or just Trip to Italy.  Our two leads traveling through Italy eating and drinking for a travel article are narcissistic, conceited, self-loathing and insecure.  It is “their” very important trip to Italy. They’re brilliantly funny in a navel-gazing sort of way and Italy is a distant third lead.

The stars, Steve Coogan and Rob Bryden may be two of the greatest comics virtually unknown to North American audiences. They’re real life entertainers who play themselves and happen to interpret themselves as prats, if excruciatingly funny prats. I’m not saying it’s them, as Winterbottom “wrote” the film but its clear improv is at its heart.

Major narcissism comes through in their interactions with women. Both are married and both opt for vacation sex without so much as a look back or a hint of remorse, as though sex is just something they expect gratis, like the food and wine. Their birth right.  Rarely has such immaturity in grown men been funnier.

They’re uncomfortably, but entertainingly competitive, for everything, the best comeback, the professional job, the women, even driving is fraught with funny edge.

Bryden announces he’s been hired to play a mob accountant on an American film, and Coogan pretends it’s okay and that he’s above pettiness but his contorting facial muscles give him away.  The lift of an eyebrow and the movement of a facial muscle say it all.

An ongoing conversation about Canadian singers is pretty juicy. They mock and praise but mostly mockAlanis Morissette, Avril Lavigne and Michael Buble.  “Where do you stand on Michael Buble?” one asks the other.  “On his windpipe” comes the straight faced reply.

They are in Foodie Lotus land (Liguria, Tuscany, Rome, Amalfi and ending in Capri) with little to do but feed off the fat of the land, but there’s something bothering them, something that may be pushing them to act out with the ladies and each other – a growing awareness of their age and impending death. They’re on the brink of 50 but feel pushed out of the sex game with the younger ladies who would now regard them not as prospects but as “creepy”.

And there’s a spirited and semi-comic debate about the mortician’s work and the nursing home experience, just to drive it home.  They let these thoughts hang in the air because they are intensely real and universal.  It will just be sooner for them than the young ladies on the beach patios duly ignoring them.

If you like cool, dry, witty sophisticated banter, with the unmistakable English flair, the film’s for you.  There’s also plenty of lowbrow fun. But know that their world begins and ends with themselves and that gorgeous Piedmont, wonderful food and wine just happen to be the scenery.

“The” Trip to Italy is absolutely hysterical if you like your funny smart. This is another “foodie” film in which we watch them carp at each other over a succession of wonderful Italian meals and gorgeous wines.  This is Coogan and Bryden’s second road movie after The Trip which had a strong melancholy element. This outing is tighter, funnier and better.  You’ll leave the theatre hungry, tummy sore from laughing so plan accordingly. 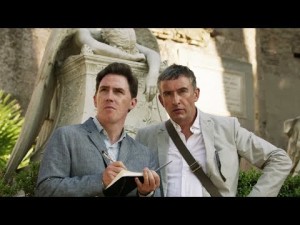